It’s 426 pages long, was published in the year 2000, and it just might be the artifact that launched Project of Heart. It’s “Canada: Face of Nation”, by Gage Educational Publishing, and it manages to give exactly 2 paragraphs to the national shame that was the Indian Residential School era.

It was this same “Face of a Nation” text that had students in POH founder Sylvia Smith’s classroom in 2007 scratching their heads and wondering where to go for a real history lesson when they attempted to do their own research on the IRS era.

Here are the infamous two paragraphs: 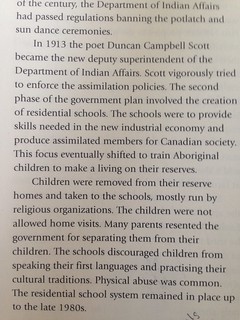 There we have it. “Many parents resented the government for separating them from their children”. Well, it was a long time ago, so let’s move on, eh?

To be fair, a lot *has* happened to mainstream Canada’s historical  self-awareness in the past 15 years. When it comes to the Residential School era, that awareness has taken a fundamental shift thanks to survivors and their children breaking the silence and demanding a national forum from which to be heard. The Final Report of the Truth and Reconciliation Commission runs to 7 volumes, and thanks to the TRC, never again will textbook publishers be able to get in and out of the IRS era in a hundred words or less.

We suspect the textbook wholesalers currently emailing end-of-year promotions to school boards and teachers across Canada *know* that, and are desperately trying to blow out some extremely dated editions.

So keep your eyes out for this one. In the promotion we saw this week, is still being priced at 103 dollars. Or about one dollar for every word they cared to write about Canada’s shame.

Note: if you are an educator looking for a way to teach about the IRS era, we invite you to visit our step-by-step guide to Project of Heart.