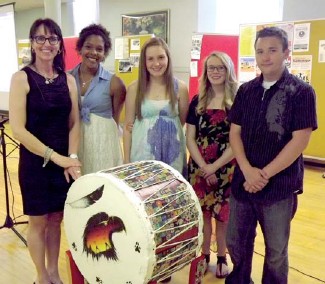 Article from Moose Jaw Express, July 18, 2013
Moose Jaw has been privileged in a special way. In a partnership between Prairie South School Division and the MJ Museum and Art Gallery, Moose Jaw was one of the first places in the country to host the exhibit “100 Years of Loss”, an exposition of the history and legacy of the Indian Residential Schools in Canada. Most recently, Moose Jaw was one of four cities in Canada chosen to coordinate Project of Heart, a second venture related to residential schools. The other locations were Vancouver, Winnipeg and Ottawa. In Saskatchewan, Project of Heart is about tiles and a drum. A First Nations drum was built by Jeff Cappo from the Lone Creek Drum Group. In the first phase of the project, students throughout the province were invited to decorate tiles to place on this drum. The tiles commemorate the children who died in the residential system. The tiled drum was unveiled at a Powwow in Moose Jaw on June 5th. Indian Residential Schools operated across the country from 1890 to 1996.

In 1920, the “Indian Act” made it mandatory for aboriginal parents to send their children to these institutions, and in 1931 enrollment was at its peak. Over the “100 Years of Loss”, approximately 85,000 children died in the system. Saskatchewan students have decorated 2000 commemorative tiles. Project of Heart was a national venture with local ramifications. Isabelle Hanson is president of the Wakamow Aboriginal Community Association and Vivian Gauvin is the vice-president. They were appointed to the Saskatchewan Regional Advisory Committee for the project. Gauvin is also First Nations, Métis and Inuit Consultant for the Prairie South School Division. Hanson and Gauvin coordinated the effort to collect the tiles from all over the province for placement on the drum. The wrap up for the project was at the end of June. Throughout this last year, Heather Miller taught a Native Studies Course at A. E. Peacock Collegiate. She had 26 students, and included in their program was intentional research on Indian Residential Schools. At the end of this course, four students were selected to make presentations before the Indian Residential Schools Adjudication Secretariat in Regina. The Secretariat adjudicates cases of physical and sexual abuse within the residential system. Seven people made the trek to Regina: Isabelle Hanson and her daughter Leslie, Vivian Gauvin and the four students selected from the class at Peacock – Alia Baigent, McKayla MacQuarrie, Desire Meriam and Seth Schmaltz. Isabelle has a Master’s in Educational Psychology, and she is also a residential school survivor. She talked about how strict it was at the school she attended. “We all had a number and it was put on our clothing. We had to do things perfectly; we had to sleep a certain way; we were not allowed to be children. We were punished severely if we spoke Cree or practiced any of our customs. I had to go to church twice on weekdays and three times on Sunday. We were really Christianized. Even though I had boy cousins at the school, I wasn’t allowed to see them or speak to them.” Leslie, Isabelle’s daughter, talked about her desire to teach others about her culture, and to this end, she has just been accepted into the Saskatchewan Native Teachers Education Program at the Gabriel Dumont Institute. The fours students from Peacock said they were shocked when they learned about the cruelties of the residential system. They were ashamed that a country like Canada created and perpetuated this injustice. McKayla MacQuarrie said, “It is not a question of who is responsible for the past. It is about our responsibility for what happens next.” Alia Baigent always attended the same schools as her twin brother. She said, “I can’t imagine never being allowed to speak to him.” Two internet You Tubes were included in the Moose Jaw presentations. “Shannen’s Dream” has to do with the quality and equality of education on reserves, and this is the social justice piece of Project of Heart. The Wab Kinew Soap Box debunks aboriginal caricatures. Members of the Secretariat were moved by what they heard. Brad Kennedy, Hearings Manager Officer said, “I really appreciated the perspective of these young people.” Julia Rex said, “I can see the immportance of remembering and spreading the word.” Lorraine Lemiski is Manager of Adminsitration for the Secretariat, and she helped coordinate the Regina event. She commented on the experience. “What we have heard here reminds us of the  importance of what we do.”