In November, the Faculty of Education Tweeted this statistic: Only a few months after being published, the Shattering the Silence: The Hidden History of Indian Residential Schools ebook had 12,453 worldwide visitors to the ebook site. Since then the site has had 22,494 visitors! The word is spreading, thanks to opportunities at the U of R for Shuana Niessen to present about the book as well as the feature in Discourse Magazine.  The next presentation will be at the Regina Public Schools Teachers’ Convention, which will be held on February 16. The session already has 82 people signed up! If you haven’t already, be sure to visit the site  with a view to using the resource in whatever sector you work. Though the ebook was written with teachers in mind, and thus curricular links are available, it is useful for learning about Indian residential schools in Saskatchewan and can be of use for understanding many of the issues affecting society today.

A Visitor Map of those reading Shattering the Silence: The Hidden History of Indian Residential Schools in #Sask (12,453 visitors to date) https://t.co/W05Qwk3q3a pic.twitter.com/H4BZZEuG13 Congratulations to Sylvia Smith, Founder of Project of Heart, who received the President’s Distinguished Graduate Student Award at the fall 2017 convocation. This award recognizes outstanding academic performance and is granted to a student whose graduating thesis, exhibition, or performance and the corresponding defense was deemed meritorious by the examining committee.

How does it feel to be finished your master’s Sylvia? (Read about the obstacles she faced)

“GREAT! In some ways, I can’t believe it’s actually finished. I’ve never really thought of myself as an academic and certainly, with ‘life’ intruding the way it tends to, I never thought I would finish the darned thing. I’m just so lucky to have had a wonderfully supportive spouse and thesis committee (Dr. Carol Schick actually came out of retirement to help out) because they certainly didn’t have to do what they did.”

What excites you about your thesis?

“What excites me so very much is that my findings have already been referenced to support work being done around reconciliation and the necessity of teaching *for* justice and more practically, *doing* it. ”

The purpose of this study was to gain insight into how settler teachers took up an arts and activist-based Indian Residential School Commemoration Project called Project of Heart. More specifically, it sought to assess whether or not the research participants were led to transformation, demonstrated through disrupting “common sense” (racist) behaviours of teachers and students as well as through their engagement in social justice work that Project of Heart espouses.

Since 2007, Ontario school boards have been required by Ministry policy to teach the “Aboriginal Perspective” in their high school courses, yet at the time of the study (2010), there were still very few resources available for educators to do so. There were even fewer resources available to teach about the Indian Residential School era. Project of Heart was created by an Ontario teacher and her students in 2007 in order to address this egregious situation.

The study was guided by grounded theory methods and the findings suggest that while Project of Heart did not achieve “transformation” in its participants as assessed through teachers’ lack of completion of the social justice requirement, teachers indicated that both students and teachers benefitted greatly because of the relevance of the learning.

Read more about Sylvia and the Project of Heart here: http://www2.uregina.ca/education/news/disrupted-studies-a-teacher-researcher-success-story/ The Shattering the Silence: The Hidden History of Indian Residential Schools in Saskatchewan ebook is a Project of Heart Saskatchewan resource for teachers.

This book extracts, reorganizes, and compiles the school-specific Saskatchewan elements of the NCTR reports and primary school documents as well as incorporating other resources and former student accounts that have been recorded and published online. It is an informative and accessible resource for teaching and learning about Indian residential schools in Saskatchewan.

DOWNLOAD YOUR FREE COPY OF Shattering the Silence: The Hidden History of Indian Residential Schools in Saskatchewan In spring 2017, The Faculty of Education’s Indigenous Family Therapies Class (EPSY 870AB) in partnership with the Indigenous Peoples’ Health Research Centre (IPHRC) have planted a Project of Heart Reconciliation Garden.

The Objectives of this project in our class were:

• To present a culturally-competent counseling intervention by integrating Indigenous knowledge within the more modern ecopsychology approach;
• To encourage a three-way therapeutic alliance between counselor, client, and nature as co-therapist;
• To deconstruct the modern therapeutic “space” by promoting nature-based therapeutic interventions; and
• To identify gardening as a social justice approach.

We based our garden design around the Honouring Memories Planting Dreams

Celebrated in May and June, Honouring Memories, Planting Dreams invites individuals and organizations to join in reconciliation by planting heart gardens in their communities. Heart gardens honour residential school survivors and their families, as well as the legacy of the Truth and Reconciliation Commission of Canada. Each heart represents the memory of a child lost to the residential school system, and the act of planting represents that individual’s commitment to finding their place in reconciliation. In 2016, more than 6500 hearts were planted in gardens across Canada.

For more information about the Reconciliation garden, please contact: 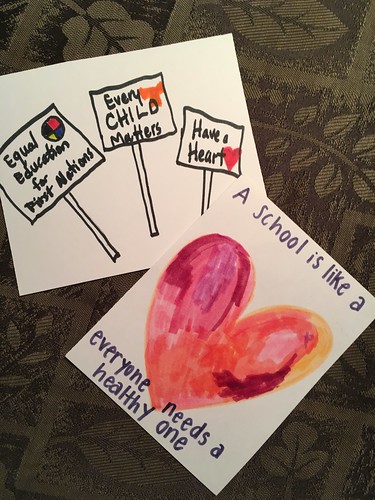 Saskatchewan Indian Institute of Technology ran with Project of Heart — and their running partner was…. a class of elementary students at Lady Evelyn Alternative School in Ottawa! How did that happen?

SIIT is located on the Asimakaniseekan Askiy Reserve in Saskatoon and Kathleen Worm is their Manager in Workforce Development. Kathleen hosted Project of Heart for over 90 IRS Support Workers gathered in Saskatoon for a conference. What was unique about this Project of Heart workshop is the way in which the participants were supported in carrying out the social justice action.

Help came from a class of Grade 3 and 4 students in Ottawa who are part of their Shannen’s Dream Club. These students made 91 beautiful post-cards, all decorated to depict their vision of what reconciliation for First Nations children on reserves in Canada would look like. The backs of the post-cards are labelled with Prime Minister Justin Trudeau’s address. The Support Workers did the rest of the work – writing what they want the Prime Minister to do to address the inequities: namely, to implement the Canadian Human Rights Tribunal’s orders to fund First Nations children on and off reserve equitably to their non-Indigenous counterparts.

The POH workshop participants in Saskatoon were able to skype in to Ms. Fontaine’s class to thank the children for their solidarity with Indigenous children. They made a heart-felt connection with the 8, 9, and 10 year olds that partnered with them in their social justice action!

Here’s what Kathleen had to report about their Project of Heart experience with the kids:

Danielle Fontaine’s Grade 3 and 4 class in Ottawa ON learn about more than the abc’s of education; they learn the abc’s of Canada’s history and the abc’s of compassionate humanism.

Danielle has been incorporating First Nations issues in the classroom for over 6 years now and the result is nothing short of loving. Teaching compassion first, Danielle’s students then learn to empathize with the current peril of First Nations children across Canada.

Shannen’s Dream, a powerful show of advocacy by a young First Nation girl wanting a school for her community was one of the stories that the students learned of. In a show of support and activism, the 8, 9 and 10 year olds designed post cards with messages and images reflecting their mind and heart on the issue of First Nation children’s educational rights. These postcards are all addressed to Prime Minister Justin Trudeau.

The Saskatchewan Resolution Health Support Workforce, the emotional and cultural supports offered to survivors going through their independent claims and hearings, gather twice a year for professional development. This past gathering in January had approximately 90 of the post cards designed by Ms Fontaine’s class. Using these postcards, messages were sent to the Prime Minister on many issues surrounding First Nations people.

To further strengthen the impact and the shared understanding, the RHSW Gathering skyped into the Grade 3 & 4 classroom in Ottawa. The excitement and joy was palpable. The opportunity to let those children see the impact of their own efforts and for the aging group of survivors to see hope for the future as young ones are taught the truth and are willing to fight for what’s right.

Thank you Kathleen and all the IRS Survivors who met their supporters for doing Project of Heart and sharing themselves with their young fans in Ottawa. The Government will continue to be challenged as long as Canada has youth who are passionate about fair play. Their message is clear.